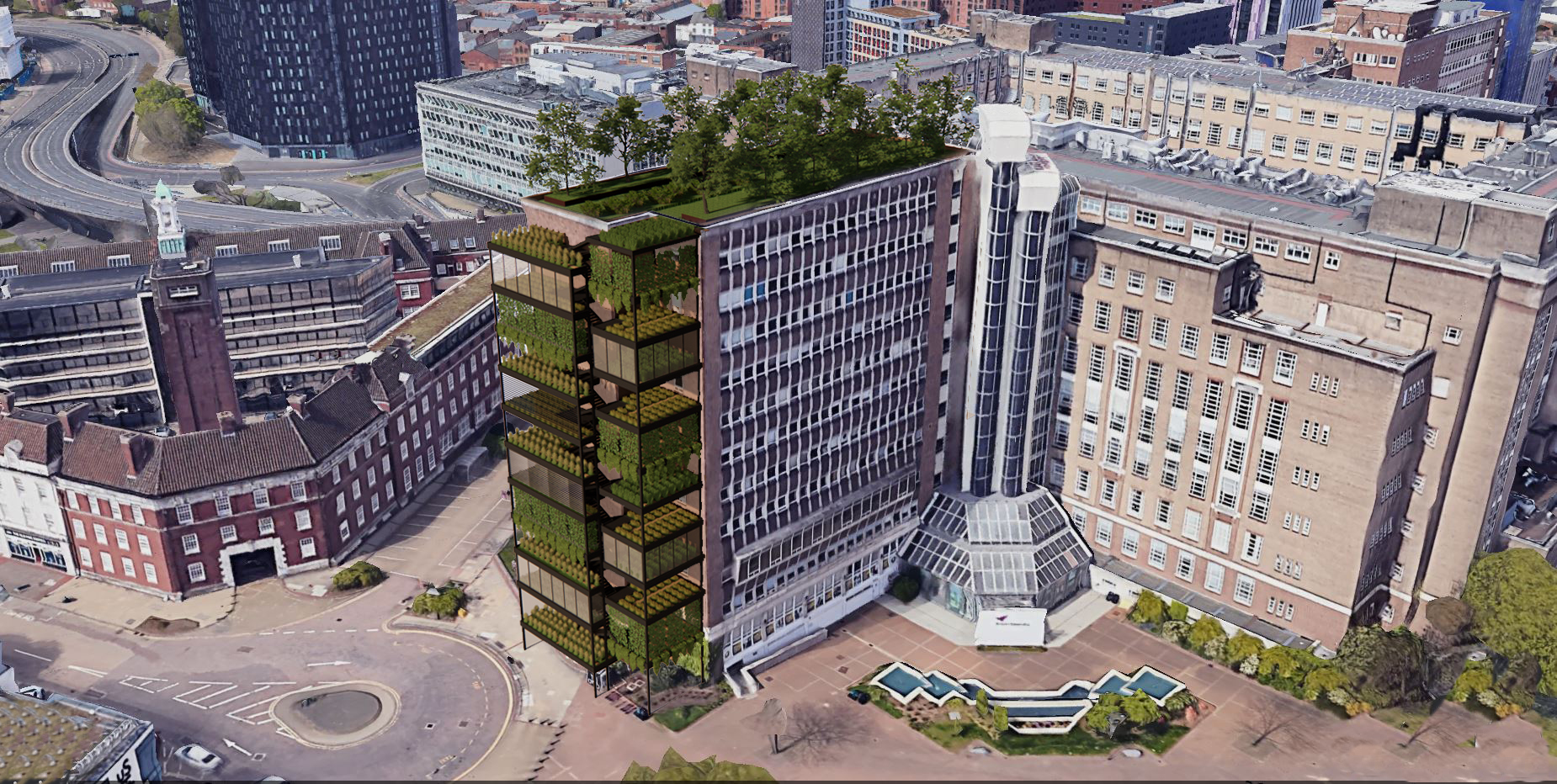 Posted at 14:07h in Uncategorized by admin

CK Architectural have been turning their unique approach to innovative design toward Birmingham to answer some of the challenges we are facing with green sustainable living. Green living buildings and renewable energy being implemented into the fabric of all our lives require outside the box thinking.

This is exactly why Managing Director Chris Lawson and Architectural Designer Joseph Grimley along with Birmingham Based Senior Designer Greg Day came together, identifying some of the greatest areas of potential that Birmingham has to offer and developing innovative designs along with cutting edge 3D visualisation to create an incredible insight as to what the future of the city may look like.

Aston University is sewn into the very fabric of Birmingham. As a hub of vibrancy in the city, it brings life into the city from across the country and the rest of the world alike. With that said, however, the current design of the iconic south wing of the campus, functioning as the main reception, is dated, and an easy target for a creative vision. An eyesore to some but a blank canvas to CK, the building is a perfect subject to learn, enlighten and improve, paving the way forward for sustainability even within urban living.

Our designs show an intricate vertical farming system along the front façade of the building, able to generate consumable produce as well as increasing the green impact of the campus as a whole, all to be utilised along with rooftop planting and rainwater harvesting, creating half an acre of agricultural real estate within the heart of the metropolitan area.

Canal Hill is one of the most underutilised and unappreciated areas in the whole of the city of Birmingham. Although it functions as a working lock for the canal system as well as being an area used by commuters to access the heart of the city and the university, more specifically, the area is largely vandalised, desolate, and generally considered unsafe because of the conditions and reputation is has developed over the years.

To combat this situation and completely transform the location into a hub of rejuvenation and modernisation, our vision is to reuse the abandoned buildings and mistreated walking space, creating just an example here of a luxurious restaurant and bar area. This includes large glass windows, the cantilevering balcony and outside dining spaces, multilevel bars and restaurants, all covered by a glass roof with hanging plants.

On the rooftop of a building in a very prominent area, in the central square directly adjacent to the Birmingham Children’s Hospital on the corner of Corporation Street and Steelhouse Lane, there is a space above adjoined restaurants, with roof space that would be incredible if transformed to a modern hospitality and landmark area. There is real potential there from the existing redevelopment and the roof is teeming with possibility.

The idea the CK team had for such a space is to create a green and nature themed bar/restaurant, combined with a hanging ivy roof, creating a true visual attraction for all-around, inclusive of a viewing point within itself to see the skyline of the city of Birmingham.

All three of these projects are just some of the countless ideas that can be had just by viewing a slither of the city and what it has to offer. Birmingham truly is the county’s second capital, and with so much underappreciation and yet so much it has to offer, it is merely a matter of time before more innovators are able to help it flourish into what it deserves to be.

We use cookies to ensure that we give you the best experience on our website. If you continue to use this site we will assume that you are happy with it.Ok